And so that brings me to today’s blog post. I’ve had this idea for a while, but surprisingly, it was harder to put together than I expected! I tried to come up with things that most people wouldn’t know, so I hope I succeeded. Anyway, here are 18 random facts about me!

I’ve probably mentioned this before at some point, but ever since kindergarten, I’ve been attending cyberschool. Basically, it’s like if someone smooshed homeschooling and public school together. I’m working on my own mostly, but I also have online classes and real teachers I answer to. I’ll be graduating next month though, which is pretty exciting!

It was through a local youth league, and I actually really enjoyed it a lot! And yes, our uniforms really were the color of Pepto-Bismol one year.

I still have a lot of it stored in a notebook, but trust me, it will never see the light of day. At least, not in its original form.

I bought it at a Rennaissance Faire a few years ago. It’s only five holes, so it’s not that hard, and I can play a few tunes (mostly from The Legend of Zelda games). My brother got all of the musical skill in the family.

I’m not necessarily opposed to either thing (I’ve read e-books on my phone and have downloaded plenty of songs), but there’s just something about the tangible versions that I love.

It’s called the Writer’s Nook, a name that was actually suggested to me by another student. I started it in 10th grade, and I love it like it’s my own child. It’ll be sad to have to say goodbye at the end of this school year!

7) I am a skilled grilled cheese sandwich maker

Well, according to my family, that is. I may not have gotten any musical skill, but I make the best grilled cheese.

You can thank my brother for this one. Also, my favorite professional team is the New England Patriots, partly because they’re a good team and partly because my family would (probably) disown me if I thought otherwise, haha.

10) I collect pins and rubber bracelets 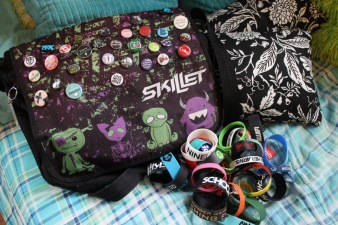 Scott Westerfeld (author of Uglies, among other books) and Adele (musician). And probably a bunch of other people, I just don’t know who.

12) I love baking and decorating cupcakes

Not only do they look pretty, but they’re also delicious. Although in fairness, I do sometimes feel bad eating them after I’ve put all that work into making them look good.

My mom took me to see it at the AMC Theatre when I was five years old. I was terrified of the first scene (with that shark and all), but after that I really enjoyed it!

14) I love the scent of vanilla

If I have a candle burning, it’s probably vanilla. I don’t know what it is, but it’s one of the best smells in the world to me (aside from chocolate chip cookies, of course).

15) I have three corkboards that I pin random stuff to

Stickers, concert tickets, notes, cards, receipts, just about anything. I guess it’s my way of holding onto memories.

16) I have a strange affinity for unicorns and pineapples

The unicorns started way back when I started listening to Eleventyseven and their weird love of unicorns rubbed off on me. I’m not so sure about the pineapples.

17) I wasn’t always planning to be an English major

In my earlier high school years, I considered majoring in business or graphic design. The business part made sense, but I’m not sure where the graphic design came from.

…with a few hiatuses here and there. My dad set up a Blogger account for me, and I posted a lot of random stuff – most of it incoherent. But I loved it anyway. I kept that going for a long time, on and off, until I finally decided I wanted a fresh start. And thus, Maggie’s Musings came to be!

It was actually kinda difficult to come up with some interesting and random facts about me, but I had fun putting this together! I hope you enjoyed it, and I’ll see you all next week!

We got another snowstorm where I live today, which reminded me of this "winter-themed" book stack I did a while back. Most of these books don't actually have anything to do with winter (except The Titan's Curse and Things Not Seen), but I always associate the color blue with winter for some reason.
The only thing Kaz Brekker and I have in common is that we're both in desperate need of a proper haircut. Anyway, I'm really loving my new sweatshirt from @college.bookcore! It's super cozy, fits perfectly, and is an excellent addition to my growing collection of Six of Crows merch.
The other day I thought "hey it'd be cool to make a superhero-themed book stack with all of my superhero-ish Funkos" and while I was taking the photo I FELT like I was missing something, but I ignored that feeling... anyway, can you guess which OBVIOUS book I forgot to include in this photo?
If you told me last week that one of my favorite books of the year (so far) would be a Romeo and Juliet retelling, I would've laughed. And yet here we are. TO BE FAIR, *These Violent Delights* isn't one of those sappy "aw it's so sad they can't be together even though they're in love!" stories. It's about gangs and rivals and monsters (which is really what R&J is about in the first place). And did I mention it's set in 1920s Shanghai? I love a good historical fantasy. Anyway, I can't believe I have to wait ten months for the sequel now.