You may be asking yourself, what happened to Maggie? She wrote one (1) thing about the apocalypse and then dropped off the face of the earth, what gives?

Life. Life is what gives.

It should come as no surprise that the last few months have been full of… happenings that required me to make some temporary adjustments to my life. One of those adjustments was going on an “unplanned indefinite hiatus,” as a band I liked once put it. The quick explanation is that combining work, school, senioritis, and a magnified lack of motivation due to the happenings made things pretty challenging!

But things are different now! I’m graduated (!) and unemployed (?!) which means two obstacles are out of the way for the time being. One of the first things I wanted to do was fall back into my blogging routine, and fall into it I shall.

And what better way to do so than to give a major life update? I promise it won’t all be boring stuff, because I read a lot of books these past few months, played some new video games, and even wrote some words if you can believe it. So onward!

Let’s see, back at the beginning of April I finished the fourth season of My Hero Academia. Not gonna lie, I expected the last few episodes to be meh, but I really enjoyed them! I’m looking forward to seeing what happens next in the series.

I also watched all three seasons of Castlevania on Netflix. I liked the first two seasons, but the third felt like it was trying to do too much and I wasn’t as interested. It’s definitely not a show for the faint of heart, but it was a good way to fill my downtime.

Finally (I think this is the last thing?) I started watching The Legend of Korra, a task that involved me acquiring the series on DVD and then purchasing a DVD player on Facebook Marketplace when I realized I didn’t own one. The show is growing on me, though it’s nowhere near the standard of its predecessor. I do enjoy learning more Avatar lore though.

PLOT TWIST. That was not the last thing. Halfway through writing this post, I realized I also finished season 12  of Doctor Who a few weeks back! It was, as another iteration of the Doctor would say, “absolutely fantastic!”

For school, I finished Homer’s Iliad and Odyssey, Virgil’s Aeneid, and Ovid’s Metamorphoses for my Ancient Epic class. They’re long books, but I’m a sucker for mythology so of course I enjoyed them (except the Aeneid, I didn’t really have any opinions about that). I’m planning to start re-reading the Percy Jackson series soon now that I’ve read some of its source material!

For fun… well, there’s a lot more of that. I think bullet points will help:

I’ve read some other books in May too, but I’ll save those for a normal “Month in Review” post in a few weeks.

Some new music that came out recently! Mainly, I’ve been listening to August Burns Red’s new album Guardians. I’ve also enjoyed the new single from Fit For A King, “Breaking the Mirror.” I was going to see them live in March, but the show was unfortunately cancelled. I’m looking forward to whenever these bands will be able to tour again though!

Like what seems to be everyone else on the planet, I’m absorbed in Animal Crossing: New Horizons on the Nintendo Switch. I played it so much that my mom bought herself her own copy to play. My little island (called Ketterdam, after the city in Six of Crows) has come quite a long way since I first began! 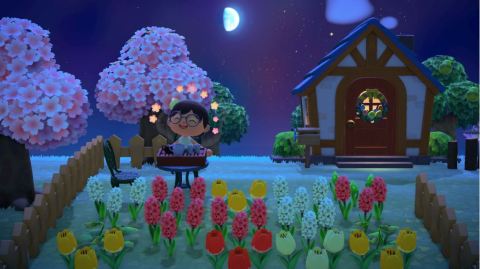 I finished Bastion from SuperGiant Games at the beginning of March and just about cried when it was all over. Speaking of SuperGiant, I also bought their latest project, Hades, on Steam. Hades is in early access, so there will still be some changes before its official release, but I’m already a huge fan. Nothing like a little Greek mythology to motivate me.

Aside from academics? Not a whole lot. I did some “for fun” writing related to my Quest project when inspiration struck, but otherwise, I’ve been keeping busy with other hobbies and projects.

I have been reviving my Instagram feed lately though! I’ve started to get back into photography, specifically so make some nice book photos for Instagram. Here’s one of my favorites:

Do you own any books in a foreign language? I bought the French edition of Six of Crows while I was in France last summer! I'm not fluent enough to read the whole thing, but I've enjoyed reading through some of my favorite scenes (with a dictionary, of course). Fun fact, "No mourners, no funerals," is translated as "Pas de sanglots, pas de tombeaux." • Also, I don't normally make tea in the afternoon, but I wanted to have a mug in this photo for the ~aesthetic~. What's your favorite reading drink? • #SixofCrows #SoC #Grishaverse #reading #YA #books

Writing this section is definitely the weirdest, because on one hand, many things have happened, but on the other hand… pretty much every day has looked more or less the same. The only thing that kept my days from running together was my class schedule.

My college switched to online classes for the remainder of the semester, which is a bummer, but I was fortunate in that the transition was relatively easy. I was also able to continue both of my on-campus jobs and my internship remotely. Yes, there were things that I missed out on, but we were all able to make the best of it. I’m really grateful for all of my professors and supervisors for being flexible.

Aside from work and academics, I hosted an online game night with some of my friends where we played Quiplash together, I attended a virtual end-of-year celebration hosted by our English department, and I got to see some of my friends present their senior theses projects. I really miss seeing my friends in person, but we’ve been able to spend time together in other ways!

That’s pretty much everything that’s been happening here over the past few months. As you can see, I’ve found plenty of ways to keep busy during quarantine or whatever you want to call it.

How about you – what have you been up to lately? Have you picked up any new (or old) hobbies? What are you reading or watching?  What’s something good that happened to you this week? I’d love to hear about it in the comments!

Until next time – and I promise next time will be soon!