A mental image for your consideration: It is 11:36 at night. The room is dim, with the only light coming from out-of-season Christmas lights strung around the perimeter of the ceiling. On the desk is a half-empty bowl of Goldfish crackers and a bottle of strawberry-kiwi flavored water. Someone is sitting at the desk, shoulders hunched over the keyboard in front of her. She types for a few minutes, then snatches a handful of Goldfish crackers absently and stuffs them into her mouth. The typing resumes.

If you could picture that, you probably have a pretty good idea of how I’ve spent several of my nights over the past few weeks. But before I go into the details of what I’ve been working on lately, let’s do a quick recap of everything that’s led up to this point.

Back in January, which feels like a million years ago, I mentioned that I had read Save the Cat! Writes a Novel by Jessica Brody. Using the STC beat sheet method, I re-outlined the three books that I plan/hope to write for Project Quest. (If you’re unfamiliar with that project, check out its page on my blog here).

And yes, I know planning three books when I haven’t written any of them sounds overambitious. It probably is. However, since I’ve already had ideas for scenes that would not fit into the plot of a first book, I decided to go ahead and work out the whole story as I understood it at the time. Like any plan, it can be altered later on, but it made more sense to at least have a plan to work with.

So there I was in the cold weeks of January, feeling fresh, motivated, and ready to take on the world – or just this project, at least. I could feel it: This was the year I would finally write the first book. 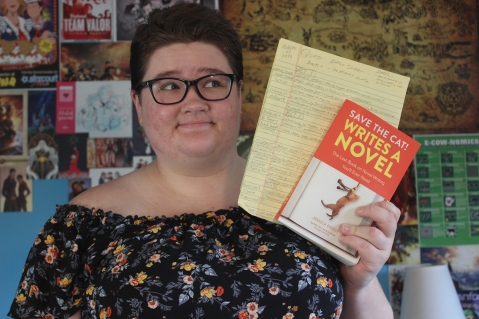 Then came February, and writer’s block smacked me in the face. Again, it feels like this all happened in another lifetime, so I don’t actually remember much about how I felt at the time. If you’re curious, you should probably just read my post about it. In short, I found myself falling into comparison traps left and right, and I decided it was best to just focus on what I wanted to write rather than what I should be writing.

But that’s not all, folks! In this once-in-a-lifetime deal, I not only received writer’s block, but I received a FREE add-on of no motivation to do anything at all, courtesy of a global health crisis. I don’t think I need to spell that one out for you. (If you’d like more details though, check out my “I’m Back” post from May.)

And now here we are in June. At long last, I’m returning to Project Quest seriously. I’ve been writing little scenes and ideas here and there during the last few months, but now I’m actually buckling down and working out the story. And instead of stressing about it, I feel… pretty great, actually. Sure, some days are easier than others, but I’ve made a lot of headway since January.

Here’s what I’ve been up to:

Using the beat sheets I created, I started working on a chapter-by-chapter outline for Book 1 of Project Quest. The last time I wrote a chapter-by-chapter outline it did NOT go well. I’m pretty sure I abandoned it halfway through the drafting phase. But this time, I’ve learned from my mistakes. For starters, I’m not writing in bullet points. I am, however, writing rather snarkily and with many sentence fragments. Good thing no one will ever read it.

The second adjustment I made was taking the time to figure out more details now. When I outlined before, I made a bad habit of saying “that’s a problem for Future Me” and moving on. Unfortunately, Future Me was just as easily distracted as Past Me, and having to figure out those details tripped me up.

This time, I’m leaving as little room for distraction as possible. Of course I can still change things – I might decide that Chapter 22 is better narrated by Adrien instead of Myrina – but at least now I don’t have to stop as much and risk falling out of my writing flow.

On a (hopefully) more fun note, I also reworked the map for the world of Project Quest. This came about because I decided on a whim that I needed to include more sea travel (). Unfortunately, my map at the time wasn’t exactly suited for long ocean voyages, but I didn’t like it much anyway, so I toyed around with some new ideas. 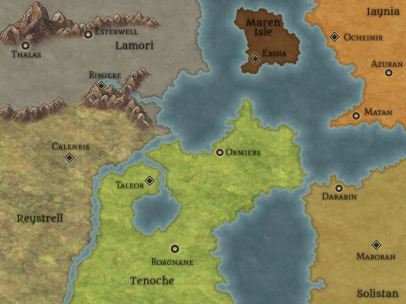 It still needs some tweaking, but I’m much more satisfied with this than my previous iterations. I found an online application called Inkarnate that’s used for fantasy map-making. Their free version has a lot of features, but if you’re like me and plan on doing a lot with it, the paid version is pretty inexpensive. (I’m not sponsored or anything, just thought I’d share this neat tool.)

With the inclusion of an ocean, I decided to create some seafaring characters because WHY NOT. They’ll probably play a minor role in Project Quest, but I love them so much that I’m sure they’ll show up in other stories set in this world.

And that’s pretty much where things stand with Project Quest right now! My goal is to at least finish my outline in time for Camp NaNoWriMo in July, but I also don’t want to rush it too much. I’ll keep you posted with what happens again next month!

What have you been working on lately – writing or otherwise? Do you have a specific process you follow when working on a project? Let’s chat in the comments!

4 thoughts on “Taking It From The Top | Writer’s Life”

Channeling my inner protagonist to make it through the day/week/month/year ⚔
Usually, I'd end the year listing my favorite books, movies, music, etc. all at once, but I decided to take a slightly different approach and share the best (and worst) books I read in a series of oddly specific awards categories. Check it out at the link in my bio, and happy new year!
I wrote a blog post about buying gifts from small businesses and artists and managed to mostly contain my dislike of Amazon, so I'd consider that a success. If you're stumped on gifts to get for all the book lovers in your life, click the link in my bio for my recommendations!
Happy Halloween from the Waffle Queen ❤